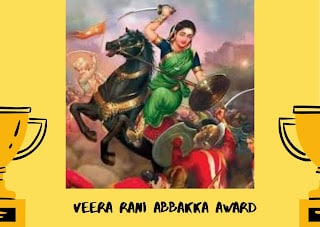 Veera Rani Abbakka Award is the award that is given to the distinguished women who have made some contribution in various field.
This award consists of cash prize and and award panels.
This award will be given to ladies on Silver Jubilee of Veera Rani Abbakka Utsav .
This Festival will celebrated on 21st December 2021 in the Ullal Municipality
The Abbakka Award 2018-19 was given to Dr. Sandhya Pai, for achievement in the filed of literature and to Urmila Ramesh Kumar, for her achievement in the various field except literature.

Who will get the Veera Rani Abbakka Award ?

Veera Rani Abbakka Award will be awarded to women who have made a sustainable achievement in the culture and research . In this Award category, those women who made some contribution to motherland and tradition ,will be given preferences .
The lady from Tulu background who have made some achievement in the field of art, sports, social service are eligible to get the award. Other areas of contribution are drama, medicine, Janapada ,local medicine, etc.

Who was Rani Abbakka Chowta ?

Rani Abbakka Chowta was the first Tuluva Queen of Ullal. She was popular with her name “Abhaya Rani” . She got this title for her fierce and feisty nature, her decisions and actions.
She fought the against Portuguese in latter half of the 16th century.
Rani Abbakka belonged to the Chowta dynasty.
Though Rani Abbakka followed the path of Jainism, her administration and army consisted of people from all sects and castes, including Hindus, and Muslims.
Her rule was in the period of 1525-1570