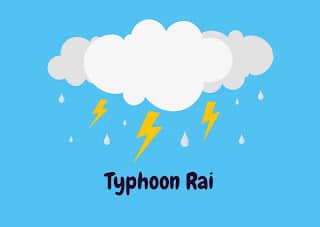 A tropical cyclone , Typhoon Rai has hit the south eastern part of Philippines making severe damage in the area. The heavy rain and floods had major impact over the large area.

The Original name of Typhoon Rai is Typhoon Odette in the Philippines.
It is the first category 5 Super typhoon in the month of December .
It is now the most powerful tropical cyclone, which impacted the Philippines after passing near the island of Palau
The typhoon has caused at least ₱25 billion ($501 million) across the Philippines
This Typhoon then traversed Visayas and exited into the Sulu Sea.

The Philippines, is a country in Southeast Asia.
It is situated in the western Pacific Ocean, and
The Philippines consists of about 7,640 islands,
These islands are broadly categorized under three main geographical divisions from north to south.
These divisions are : Luzon, Visayas, and Mindanao.

What is a Typhoon ?

The term typhoon is the regional name in the northwest Pacific for a severe (or mature) tropical cyclone which has wind speed in the range of 118 – 220 km/h.