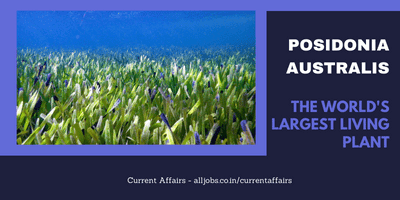 Posidonia Australis : The world’s largest living plant has recently bee discovered in the shallow waters off the coast of western Australia. This plant spans an area of about 20000 hectares.

The plant spans a total area of nearly 20000 hectares ( 49,000 acres). This plant has double the number of chromosome than any other similar plants. Generally such plants have 20 chromosomes, but this plant have 40 chromosomes. This plant usually grow to around 35cm per year. According to the researchers ,this plant does not spread its seeds. This plant has survived in such conditions because is a polyploid. A polypoid have 100 percent genome from the parents ( not half -half from each parent). These plant can survive in extreme conditions and continue to grow if left undisturbed.

This plant spreads out like meadow as a result it become a habitat place for marine species like turtles, dolphins, fish ,etc. Studies have resulted that such plant can live upto 1,00,000 years.

According to Dr. Elizabeth Sinclair “It appears to be really resilient, experiencing a wide range of temperatures and salinities plus extreme high light conditions, which together would typically be highly stressful for most plants”

Q. What is the estimated age of the recently discovered plant – Posidonia Australis ?

Ans. The researchers have estimated that this plant is about 4500 years old.

Q. Where the plant Posidonia Australis have been discovered ?

Ans. Posidonia Australis have been discovered in the shallow waters off the coast of Western Australia.

Q. Researchers of which university have discovered the plant Posidonia Australis ?

Ans. This plant have been discovered by the researchers of Flinders University and the University of Western Australia

Q. What type of plants are Ribbon Weed ?