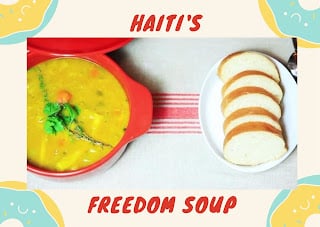 The UNITED Cultural Agency has placed the Joumou Soup in the UNESCO Intangible Cultural Heritage List. Joumou Soup , also famous as Haiti’s Freedom Soup is a symbol of Independence of India.

Joumou Soup is a mildy spicy soup native to Haitian cuisine . The soup is traditionally cooked in pumpkin winter squash .
The main ingredients of the Joumou Soup are : Squash, beef, potatoes, and green vegetables like cabbage, celery ,etc
The soup is always served hot and is usually accompanied with a sliced bread which dipped in the soup.
Joumou Soup is traditionally served on January 1st to commemorate the day of Haiti’s liberation from France in 1804.
Soup Joumou is pronounced as “joo-moo”.

Following elements of India are in the Intangible Heritage List