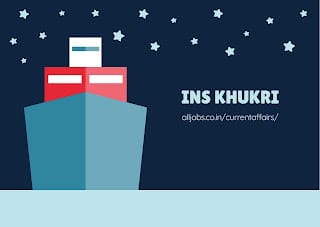 On 24 December 2021, INS Khukri (P49) has been decommissioned. It has served the country for 32 years. See more details here about INS Khukri on the current affairs section.

INS Khukri was a Type 14 (Blackwood-class) frigate of the Indian Navy.
She was sunk off the coast of Diu, Gujarat, India by the Pakistan Navy Daphné-class submarine Hangor on 9 December 1971 during the Indo-Pakistani War of 1971.
This was the first warship sunk in action by a submarine since World War II. It remains the post-Independence Indian navy’s only warship to be lost in war to date.

The ship was built by Mazagon Dock shipbuilders on 23 August 1989. The builder of the ship was J. Samuel White The ship has travelled a total distance of 644897 Nautical miles which is equal to 1194349.24 km. Its quite interesting to note that this distance is 3 times the distance between earth and moon.

About the Solemn Ceremony

In this Solemn Ceremony, the chief guest was Vice Admiral Biswajit Dasgupta with some serving and former commanding officers of the ship .The solemn ceremony was held at Visakhapatnam on 24 December 2021 to decommission the INS KHUKRI.

Q1. How many INS ships are there in India?

There are a total 150 ships and some submarines till date.

Q2. When was Khukri commissioned?

INS Khukri was commissioned on 20 November 1956

Q3. Who is the father of Indian Navy ?

Chhatrapati Shivaji is Known as the father of the Indian Navy.