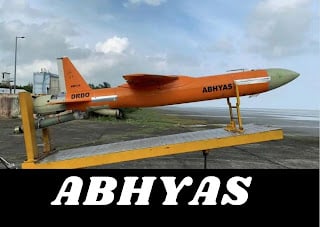 DRDO has successfully tested the High-speed Expendable Aerial Target Abhyas at Chandipur off the coast, Odisha on December 23, 2021.

DRDO Abhyas is a high-speed expendable aerial target (HEAT) being built by the Aeronautical Development Establishment (ADE) of the Defence Research and Development Organisation (DRDO) for the Indian Armed Forces.

It is also GPS-enabled and has an onboard flight control computer and a miss-distance indicator.
The aircraft is designed for autonomous flight with the help of an autopilot.

The aircraft is controlled from a ground-based controller and an indigenously developed MEMS- based Inertial Navigation System along with Flight Control Computer . It helps it to follow predesignated path in automatic mode.

The success full test of the aircraft will boost the powers of Indian Military Forces. It is a great testimony of the synergy between scientists and the Indian industry.

It is a high speed expendable aerial target Abhyas. This is being built by the Aeronautical Development Establishment of DRDO for Indian Armed Forces.

Q2. When did first flight took place of ABHYAS ?