Q1) Who has been brought on board as investor and brand ambassador by Jaipur - based home furnishings brand Bella Casa ?

Q2) The chief justice of India S A Bobde has recommended whom among the following as his successor ?

Q3) Which organization among the following has recently performed " Free Space Quantum Communication " for the first time ?

Q4) Indian is going to send how many doses of COVID-19 Vaccines i.e. Astra Zeneca Vaccine to the UN peacekeepers ?

Q5) The campaign named as " Mera Mask Meri Suraksha " has been recently launched by which state ?

Q6) Gurpreet Singh has recently won the title " Senior Mr. Punjab " . He belongs to which city ?

Q7) Which singer has been selected for the State government's highest honour " Maharashtra Bhushan Award " ?

Q8) Who among the following has been appointed as the CEO of UIDAI ?

Q9) Who among the following has launched the Central Scrutiny Centre and IEPFA's Mobile App ?

Q10) Indian Coast Guard Ship "Vajra " was commissioned by General Bipin Rawat (Chief Defense Staff) in which one of the following state ?

Q11) India will participate in which one of the following country- led naval drill La Peros for the first time ?

Q12) Which competition has Kiren Rijiju included in Khelo India Youth Games 2021 as a sport ?

Q14) Which Type of Mutant Corona Virus has been recently found in India ?

Q15) Who has won a skeet medal in shooting World Cup at the Dr. Karni Singh Tange , Tughlakabad . ?

Q17) Where is the headquarter of UNODC (United Nations office on Drugs and Crime ) ?

Q18) Samsung India has inaugurated a Samsung Innovation Lab at which one of the following university to focus on collaborative research and training ?

Q19) Who will be Chairman and Managing Director of FCI (Food Corporation of India ) ?

Q21) In which state the formal indigenous language knowledge system school has been inaugurated ?

Q22) World Theatre Day is observed on which day ?

Q24) When has the Haryana Government decided to implement the law of providing 75 % reservation in private sector jobs ?

Q25) Harsh Mariwala is the founder of which company ?

Q26) In which city , Indi - (South )Korean Bilateral Friendship park has been inaugurated ?

Q28) Who has been appointed as the Chairman of Airports Authority of India under Ministry of Civil Aviation ?

Q30) The first inter - state tiger relocation project was started in which year ?

Correct! Wrong!
AJ GK Question-28March 2021: AJ Current Affairs
Thanks For Completing the Quiz
You can download the pdf of this quiz from our telegram channel

Thanks for attending the quiz.

If You Find it useful, Please do share it with your friends 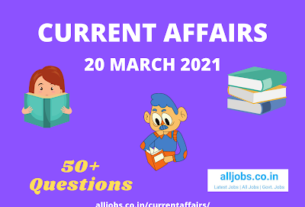