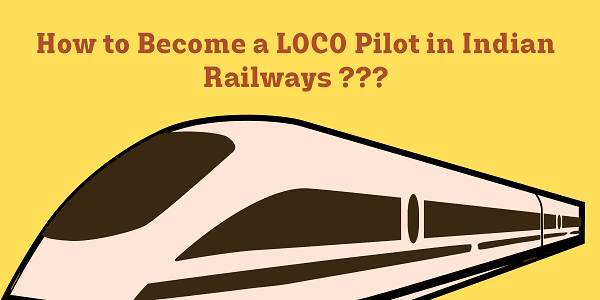 Loco Pilot is a dream profession, career for some the government job aspirants. Loco Pilot gets the opportunity to travel across the country during his service.

Loco Pilot is a government post in the Indian Railways . Loco Pilot is the driver of the train. He is the person who drives the train from one station to another.

He is responsible for driving the train safely and help the passenger to reach their destination safely and at accurate time. In Indian Railways Loco Pilot is a Group B job profile.

For some people in India, it is a matter of pride if they get the opportunity to work as loco pilot in Indian Railways.

To become a loco pilot in the Indian Railways , the candidates must have the minimum qualification of Matriculation Passed and completed the ITI diploma.

A candidate who have passed the Class 10th exam and completed his ITI Diploma course is eligible for applying for the examination of Loco Pilot.

Note that the ITI Diploma must be of two years from educational institution recognised by NCVT or SCVT. The candidate having diploma in the trade – Mechanical, Automobile, Electronical, are eligible for the post.

Moreover , a candidate having graduation(engineering) in the same field/trade can also apply for the post.

An average loco pilot earns more than Rs 30000 thousand during the joining and keeps on increasing on the bases of their experience, promotions and policies of the government .

A loco Pilot at different rail routs also get extra benefits in their salary.

Job Profile of a Loco Pilot

Training of a Loco Pilot : A candidate who have passed the examination and cleared the interview and medical test is then given training of loco pilot.

During his training period the candidate is given technical and non technical knowledge .

How to Become a Loco Pilot ?

To become a loco pilot a candidate have to pass these stages.

Physical Eligibility : For Becoming a loco pilot, the candidate must be medically and physically fit. Candidate must have good eyesight (6/6).

CBT Stage 1 : The CBT Stage 1 exam is a common exam for the post of Assistant Loco Pilot and Technician . This exam consists of 75 question which are to be answered by the candidate in a time period of 60 minutes.

There are a lot of books in the market which consist of the syllabus and question and concepts which are asked in the examination for loco pilot.

Some of them are – Arihant , Unacademy , Adda 247 , Disha Publications, RS Aggarwal etc.

Q. What are the pros of becoming a Loco Pilot ?

Ans.
There are a lot of Pros(advantages) of becoming a Loco Pilot.
1. Its a permanent government job. It ensures job security.
2. This job is good for the person who wishes to travel new places.
3. This is a respectable job.

Q. What are the cons of becoming a Loco Pilot ?

Ans.
There are some cons for becoming a loco pilot –
1. It is an on field job. In this you will have to stay away from home during the travel.
2. Some time you have to the night shifts also.