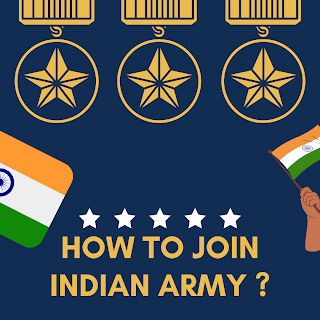 How to Join Indian Army : Getting placed in Indian Army is one of the dream of many boys and girls in India. So in this article you will get each and every important detail to join Indian army.

Indian Army provides a lot of opportunity for aspirants to join India Army at different level.

The Indian Army is the land-based branch and the largest component of the Indian Armed Forces. The President of India is the Supreme Commander of the Indian Army, and its professional head is the Chief of Army Staff (COAS), who is a four-star general.

Why to Join Indian Army ?

How to Join Indian Army After 10th

On the basis of class 10th you can join Indian Army for the following posts
1. Soldier General Duty
2. Soldier Tradesman

Candidates are selected for Soldier General Duty through the recruitment rallies organised by Indian Army.

The students can get the information related to these recruitment rallies in news paper and official website of Indian Army.

Any Candidates who satisfy the eligibility criteria can join Indian army for these post through the recruitment rallies organised by Indian Army.

The students can get the information related to these recruitment rallies in news paper and official website of Indian Army.

To Join Indian Army after 12th class, there are three ways. These are-
1. Through NDA Examination
2. Technical Entry Scheme
3. Soldier Entry Scheme

Every year NDA Exam is conducted two times by UPSC. This exam is conducted all over India for recruitment of candidates for a total of 320 vacancies ( may change as per time ).

The Notification for the NDA Examination is released in the month of June and December every year. Student must check the notification frequently to know the latest updates.

Moreover there is age criteria also, For applying NDA Examination your age must be between 16.5 to 19.5 years.

Note : If you are applying for Indian Navy and Indian Airforce through NDA Exam, then you must have maths and physics in class 12th .

For other field in Indian Army and NDA department , you can apply from any stream in 12th. For NDA Exam, only Unmarried male and female are allowed.

Selection Process
For getting selected in Indian Army , Navy and Airforce, after 12th You must clear the NDA Exam followed by an SSB interview.

TES Exam is also conducted twice in an year. And Indian Army recruit 90 candidates (may change as per time ) through TES.

The Notification for TES Exam is released in the month of May/June and October/November. Students must keep checking the official notification for the latest updates.

Eligibility Criteria : For the TES Exam , Only those students are eligible who have cleared Class 12th through the Science Stream and have secured an aggregate 70% in Physics, chemistry and maths.

The age limit for the TES Exams is 16.5 to 19.5 years. Only Unmarried Male Candidates are eligible for the TES Exam Students can apply for this exam by official website of Indian Army i.e. joinindianarmy.nic.in

Selection Process : For Getting selected ,the candidates must clear the TES Exam. And candidates are called for interview on the basis of cutoff marks in the exam.

Students must check the official website of Indian Army for information about these recruitment rallies frequently.

Indian Army select the candidates from these rallies through written test , physical test medical test for other ranks in the Indian Army.

Through these rallies , one can apply for other ranks like Soldier General Duty ,Soldier Color, Soldier Tech, Soldier Nursing Assistant, Soldier Tradesman etc in Indian Army

The eligibility criteria age limit is different for each of these post and can be checked in the official notification. Minimum Qualification is 12th Pass.

The age limit for these recruitment is 17.5 year to 21 years. and different for different post and can be checked at official website.

How to join Indian Army after Graduation ?

There are many ways by which a candidate can join Indian Army as an officer after Graduation. These are
1. Through CDS Exam
2. Special Entries for NCC
3. University Scheme
4. TGC Entry
5. JAG Entry
6. AFCAT Exam
7. INET Entry

Ans. Yes, you met the age criteria and qualification criteria, then you can write NDA exam after 12th.

Ans. You can join army directly through the recruitment rallies organised by Indian Army.

Q. How to join Indian army after 12th without NDA ?

Ans. Without NDA you can join Indian Army Through TES Exam (Technical Entry Exam). This exam is easy as compared to NDA Exam.

Q. How to join Indian Army after graduation directly ?

Ans. Through the CDS Exam